So I recently trieds getting the train to work. My commute is about 24 miles, and would take about 45 minutes if there was no traffic. Sadly, there is lots of traffic, and I regularly queue at various junctions, roundabouts and places where two lanes become one. There is also the issue of parking – not enough spaces for the all of the people. I checked out the Car Sharing scheme, but none had exactly the same journey, and going ino Bath would make the journey even longer.

So I decided to check out the train. The journey was 1 hour 15 minutes, so a little longer, but I would be able to read, or sleep, or make use of my much neglected 3DS. It costs more – £12 for a day return, and as it was a horrible wet day, a few pounds to park at the station too.

The train was on time, and not too busy, so I quickly found a seat. Then I encountered problem number 1.

Trying out the train today to work from Yate to Trowbridge with @FGW. Leg room is a bit tight… pic.twitter.com/Mm9aTOi6Ei 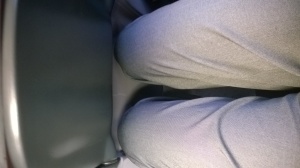 I’m 6’2″, and most of that is in my legs. It was not comfortable. There were some seats in bicycle storage areas which would have given me more leg room, but these were, eventually, used for bicycle storage.

I voiced my view on Twitter (see above) and was pleasenetly surprised to get a reply:

@doobarz Hi Richard, sorry it's it's uncomfortable for you. Jess

As First Great Western seemed to be up and about early, I decided to ask about the onboard facilities. This was something I should have thought about before I boarded to be honest, but as I hadn’t, I decided to test Jess’s knowledge of the rolling stock.

@FGW thanks Jess. Am I right in thinking no toilet on this service (0712 from Yate to Westbury) – I have an ileostomy

@doobarz It doesn't look like it, I'm afraid. If there are, will be near the doors. Should be a Train Manager on board though 1/2

@doobarz They may be able to provide a solution for you if you do need the facilities. Jess 2/2

Now as it happens I didn’t need the facilities – on the way to or back from work, but I wonder what the Train Manager might have come up with? Any thoughts?

So, I have ruled out the train as a way of getting to work ona regular basis for me – too expensive, too uncomfortable, and no toilet. And no rum and coke or dirty jokes – in fact hardly anyone said a word.

This post is part of a series telling my #StomaStory. Please share it, and if you’d like to donate to Crohn’s & Colitis UK and the Ileostomy Association, you can via http://uk.virginmoneygiving.com/RichardHarris19