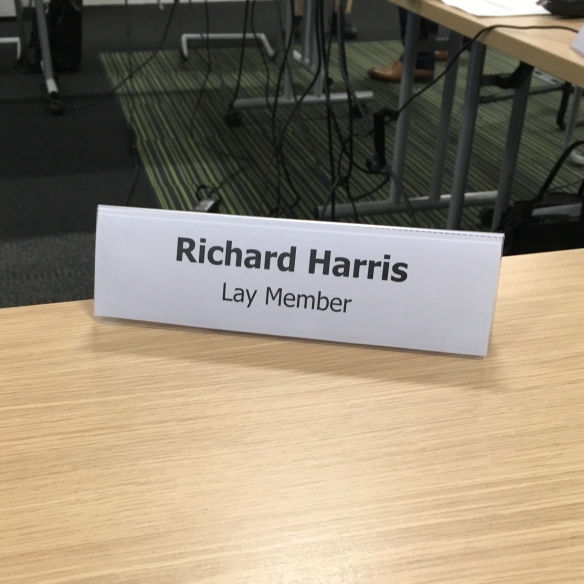 So last week I journeyed to Manchester for my first meeting of the National Institute for Health & Clinical Excellence (NICE) Ulcerative Colitis (and Crohn’s Disease) Guideline Committee. If you follow me on social media, you may have seen my stressing about a laptop issue which resulted in some late night computer fixing, learning all kinds of new skills…

Due to big taxi queues (there was European football in Manchester) I walked from the station to my hotel near Manchester Arena. I was struck by the numbers of street homeless – seemed to be many more than in Bristol – which was sad to see.

The next morning after the laptop rebuild was done and the files backed up I set off to find the NICE offices, which are right in the centre. The meeting room was really nice, and the chair and NICE Project Manager introduced themselves. I also met the other lay member, Sophia.

We started with introductions – various NICE staff with different roles and skill sets, and then committee which is made up of colorectal surgeons, a GP, a pharmacist, an IBD nurse, gastroenterologists and a dietician. It was really interesting to hear from the Public Involvement Advisor, who underlined the importance of lay member involvment, and spoke about how lay members have;

We lay members are not expected to have the full technical or scientific knowledge, but we do bring a different and needed perspective to the committee. It was very reassuring when faced with a room full of medical professionals!

The guideline we are working on is around the use of certain medications that are used for people (adults and children) with mild or moderate ulcerative colitis – at least to start with, as the full scope is still being agreed. There is still a need for some Crohn’s lay expertise for the committee, and you can apply here but hurry! The deadline is 5pm on 11th December.

We had input from various NICE team members and how the process will work, health economics and network meta-analysis. It was an intense day. I did a little input about my journey, as did Sophia and these were well received.

Apologies if you are finding this a little short on details – the actual content of what we are discussing has to remain confidential, and it hasn’t all been agreed yet. What I can say is that there was a real focus on the exact wording of questions and search parameters for the research we want to look at, and that all of the NICE staff were very supportive when questions were asked (often by me because statistics was never my strongest point).

We’ve since been asked to comment on a final draft, and our next meeting is in January – so I will update you again then. If you have Crohn’s, or are a carer for someone with Crohn’s do consider getting involved.