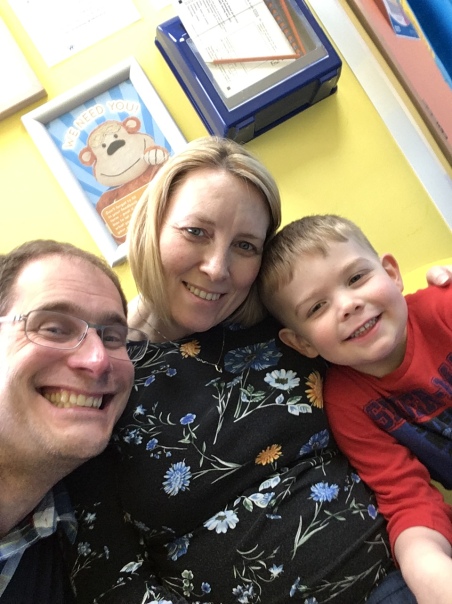 A few weeks ago, when checking on my son before we went to bed we discovered he had had an accident and pooped in his PJs. It hadn’t woken him, and he seemed otherwise OK when we woke him up to change him. A little while later he woke again and came into bed with us, and I was kicked out into his bed. He had a high temperature, we gave him some Calpol. He didn’t really settle, and so was downstairs early, sat on the sofa and watching TV and snuggling mummy, temperature still a little high.

In the early hours the diarrhea started, and he was just a poorly little boy. he didn’t complain, but was very quiet as we tried to get him to sip water. He even managed a little breakfast.

About mid-morning, when we wiped there was blood. Not a huge amount, but blood. So it was 111, out of hours GP followed by a trip to Bristol Children’s Hospital – by which time the second lots of Calpol and the Nurofen had kicked in and the fever reduced. He was still often having to go to the toilet – which made the journey home interesting when we had to pull over in road works (thankfully there was a pub). The diagnosis – a stomach bug, albeit a nasty one.

Small children have a wonderful way of causing embaressment don’t they? Like suddenly being well when the paediatric A&E doctor is able to see them? Still, the doctor did get a cuddle when it was all over…

As a parent, these kind of episodes, whilst rare, can be prety scary. Between mummy and daddy you have to not panic, make the right phone calls, and then prepare for a possible trip for several hours – snacks, drinks, changes of clothes, towels for the car, books and toys to entertain. And I’m usually the non-panicker. This time however I had an added feeling of dread – because my first UC symptom was blood on the paper. What if I had passed this disease on to my little boy? What if he had to have a colonoscopy? Or a stoma?

I know that there is a slightly higher chance that my son will have UC – but only slightly. Neither of my parents or grandparents had it. For those few hours though there was a real fear in me, and I think for some days afterwards.

However, he recovered just fine, and no further symptoms. I think the fear will always be there, but the treatments now compared to when I was diagnosed are so much better if he doe shave it – which he probably doesn’t.

3 thoughts on “The Hidden Fear”